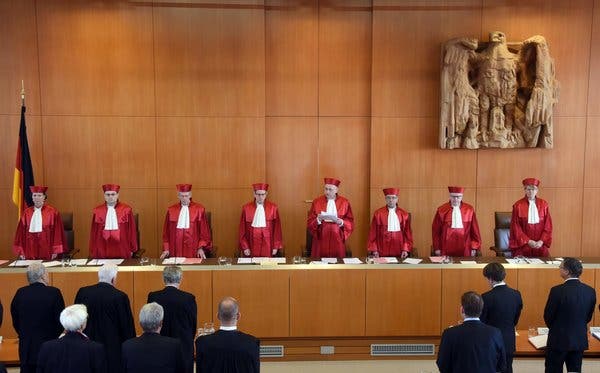 Today’s ruling by the German Constitutional Court (“the Karlsruhe Court”) is a watershed moment in the European project.

The case concerns an ongoing tug of war between the  EU’s Supreme Court (“the ECJ”) and the Karlsruhe Court on the legality of the ECB’s ongoing purchase of sovereign bonds.

Without going into the complications of the case, we note the following.

The Karlsruhe Court has openly challenged the supremacy of the ECJ

In its press release, the Court states :

“[The ECJ’s mandate] is exceeded where the traditional European methods of interpretation or, more broadly, the general legal principles that are common to the laws of Member States are manifestly disregarded.

[The Karlsruhe Court] is not bound by the ECJ’s decision but must conduct its own review to determine whether the Eurosystem’s decisions on the adoption and implementation remain within the competences conferred upon it under EU primary law.”

In so doing, the Karlsruhe Court chose to disregard the approval by the ECJ of the ECB’s decision in question.

It is doubtful that parallel proceedings in the ECJ will suffice to restore the ECJ’s supremacy in the context of this case.

The Karlsruhe Court laments the “self-imposed restraint” shown by the ECJ in reviewing the ECB’s decisions, and further requires that a proper test of proportionality be conducted by the ECB when resorting to extraordinary measures :

“[The ECB’s decisions] contain neither a prognosis as to the PSPP’s economic policy effects nor an assessment of whether any such effects were proportionate to the intended advantages in the area of monetary policy. It is not ascertainable that the ECB Governing Council did in fact consider and balance the effects that are inherent in and direct consequences of the PSPP, as these effects invariably result from the programme’s volume of more than two trillion euros and its duration of now more than three years. Given that the PSPP’s negative effects increase the more it grows in volume and the longer it is continued, a longer programme duration gives rise to stricter requirements as to the necessary balancing of interests.”

The above passage has two implications :

It is indeed rare to find decisions of central banks being put to the test of judicial review, and this must be taken as a welcome development.

The Court has observed that “constitutional organs must (…) actively take steps seeking to ensure adherence to the [limits of the] European integration agenda, work towards the rescission of acts not covered by the integration agenda and – as long as these acts continue to have effect – take suitable action to limit the domestic impact of such acts to the greatest extent possible.”

Specifically, the Government and Parliament must “continue monitoring the decisions of the Eurosystem on the purchases of government bonds (..) ensure that the [Eurosystem] stays within its mandate”.

An Economic Damocles Sword Has Been Hung

In the absence of a new proportionality test applied and communicated by the ECB within 3 months, Germany’s Central Bank has been ordered to “no longer participate in the implementation and execution of the ECB decisions at issue” and to “ensure that the bonds already purchased and held in its portfolio are sold based on a – possibly long-term – strategy coordinated with the Eurosystem.”

There is, however, just a small problem : the ECB has no mandate to use a Eurozone country‘s budget to finance the budgets of another Eurozone country, and that is precisely what it has been upto : 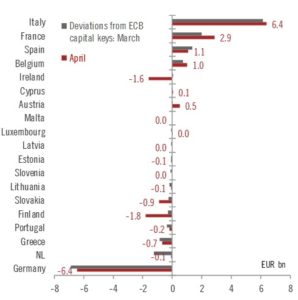 The ECB is going to have to come up with abstruse mental gymnastics to justify this decision, and the Karlsruhe Court has already made it clear that it is not bound by the ECJ’s reasoning, should the ECJ decide to condone these mental gymnastics.

The Euro ‘Stumbles Along’

Although one may consider that this decision is a prelude to systemic events to come in the following months and years, it is equally likely that the Eurozone will continue to “stumble along”, until the damage caused by the ECB’s monetary policies leads to an even deeper crisis. Initial reactions from the German Government and the European Commission seem to suggest that the strategy of the ECB would be to delay any meaningful implementation of the Karlsruhe Court’s decision, and to play for time with the Karlsruhe Court until the case becomes moot.

The decision of the Karlsruhe Court will surely give additional impetus to Northern Europe’s skepticism of the ECB’s policies. Whether it actually changes the direction of the ECB remains to be seen.

This website uses cookies to improve your experience while you navigate through the website. Out of these, the cookies that are categorized as necessary are stored on your browser as they are essential for the working of basic functionalities of the website. We also use third-party cookies that help us analyze and understand how you use this website. These cookies will be stored in your browser only with your consent. You also have the option to opt-out of these cookies. But opting out of some of these cookies may affect your browsing experience.
Necessary Always Enabled

Any cookies that may not be particularly necessary for the website to function and is used specifically to collect user personal data via analytics, ads, other embedded contents are termed as non-necessary cookies. It is mandatory to procure user consent prior to running these cookies on your website.